Photos of the Transit of Venus, extremely rare event! 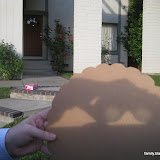 A transit of Venus across the Sun takes place when the planet Venus passes directly between the Sun and Earth, becoming visible against (and hence obscuring a small portion of) the solar disk. The event is visible for several hours.

Transits of Venus are among the rarest of predictable astronomical phenomena. They occur in a pattern that repeats every 243 years, with pairs of transits eight years apart separated by long gaps of 121.5 years and 105.5 years.

Venus transits are historically of great scientific importance as they were used to gain the first realistic estimates of the size of the Solar System. In particular, observations of the 1639 transit, combined with the principle of parallax, provided an estimate of the distance between the Sun and the Earth that was more accurate than any other up to that time.

Click on the picture above to see more pictures from our observation of the Transit of Venus.
Posted by Blaine at 11:11 PM 0 comments