As in prior years, the reward for solving is a video Christmas card, but you'll need to figure out the password by solving the puzzle.

Note: If you need some help, the full answer is posted here, but try solving it without help first... it's more fun that way.

Feel free to add a comment below to let us know that you successfully figured it out (without giving away the answer to others). We are always looking for new ideas for next year's Christmas puzzle, so submit those too.
Posted by Blaine at 5:39 PM 0 comments 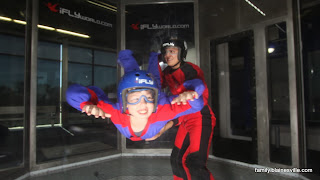 For Jason's 12th Birthday, we went to iFly Indoor Skydiving. It was a blast and we all had fun! Can't wait to try it again.

Check out the video of Jason's 12th Birthday - Indoor Skydiving
Posted by Blaine at 1:12 AM 3 comments


For Amara's 10th Birthday, she chose an Olympics-themed birthday party with various sporting events and party games.  The party began with guests entering the "Olympic Village" and decorating their water bottles with markers and stickers.

The first events were Synchronized Ping Pong (like "Simon Says") and Basketball-bomb (like "Hot Potato").  That was followed by a Parade of Nations Quiz where the teams tried to match pictures of flags to their respective countries.

The rotating events included Candy Matching (like "Memory"), Javelin Throwing and Sailboat Racing.  After each guest had a chance to compete in each event, we had the Gold Medal Piñata ceremony.

Back inside, as we were grilling hamburgers, we kept the kids busy with our version of Scattergories followed by several rounds of Olympic Events Bingo.  Finally, Felicia brought out the homemade Gymnastics cake, with a fondant-wrapped cookie dough mat.
Posted by Blaine at 2:23 AM 0 comments

It is that time of year when the 4th graders study the California missions and create a Mission Project of one of the 21 missions.

Interesting facts about the Mission: