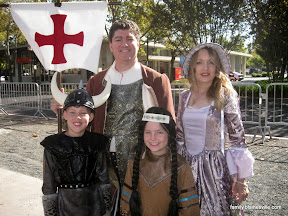 For our 13th year of dressing in a family theme for Halloween, we chose to dress as Early Explorers of the New World. We entered two local Halloween costume contests and we won first place and second place respectively in the groups and family categories.

We had Amara as an "Indian", Jason as a Viking, Blaine as Christopher Columbus and Felicia as an English colonist. Michael and Rosemary opted to "do their own thing" this year, so Michael dressed as "The Creep" from the Lonely Island music video of the same name, while Rosemary dressed as Princess Zelda from the Ocarina of Time. Click the photo above to see a slideshow and other details on our costumes.
Posted by Blaine at 5:18 AM